If you have built RESTful or other OpenAPI-like APIs for some time and wondering what’s next for you, then you have come to the right place. This article series discusses leveraging gRPC to build your next API, even multiple services. We will initially look at the main concepts from a high-level view and then move on to the implementation aspects of it.

There are many tutorials on getting started there. But the main issue I faced was that they even made me more confused as there was a lot of contexts lost in the process and brought in way too many third-party libraries or explained a bunch of steps without emphasizing how different pieces work together. Therefore, I thought to create a guide for anyone who’s interested in getting started with gRPC from a hands-on perspective.

This article is the first part of a series on gRPC. The links are down below. If you want to jump ahead, please feel free to do so.

One of the popular choices for building APIs nowadays is creating a RESTful service. However, before even coming to REST API, we need to look back to see other forms we used to have in the past.

What if I want to have some bi-directional communication? None of the above solved that. Then we got technologies like WebSockets and Server Sent Eventing.

There’s a recurring theme going on in the above technologies. It could be summarized as the messages being (bulky, not strongly typed etc.) and inefficient protocols (text-based such as HTTP 1.x etc.).

gRPC was born to address some of the challenges we face in the above approaches. In 2015 Google released gRPC to the open-source world. The idea behind gRPC is to enable developers to use RPC-like communications over HTTP/2 while have a single client library. Whoever is maintaining gRPC will maintain the client libraries. Because HTTP/2 works on binary format, gRPC will also abstract away the HTTP/2 stuff from you. The developers only have to define their service contracts through requests, responses and RPC calls, and the gRPC framework will handle the rest for us.

💡 Even before we start learning about gRPC, you must have also thought about what the “g” in gRPC mean? Some say it stands for “Good”; others say it stands for “Google”. You know what? It doesn’t matter as it doesn’t provide more context. You can find all the different variations here, which is, by the way, hilarious! 😂 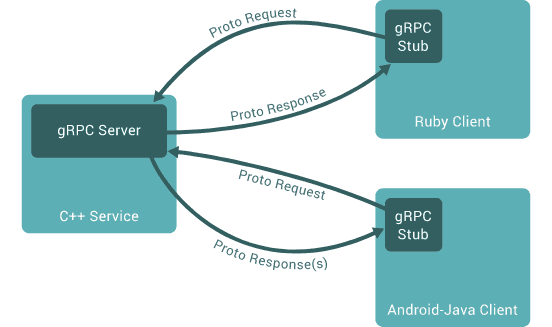 They are a language-agnostic way to define what your service does. These are commonly known as “IDLs” or Interface Definition Language(s).

So the steps are,

It’s also worth mentioning that Protocol Buffers are not the only way to define our IDLs. There are other formats like FlatBuffers, Bond etc.

Let’s say we want to model a book shop which can be queried to get a list of books available. This is what a protocol buffer would like:

The above is an example that we will use throughout this blog series. Don’t worry if you don’t understand what’s going on here. We will go in-depth in upcoming posts. 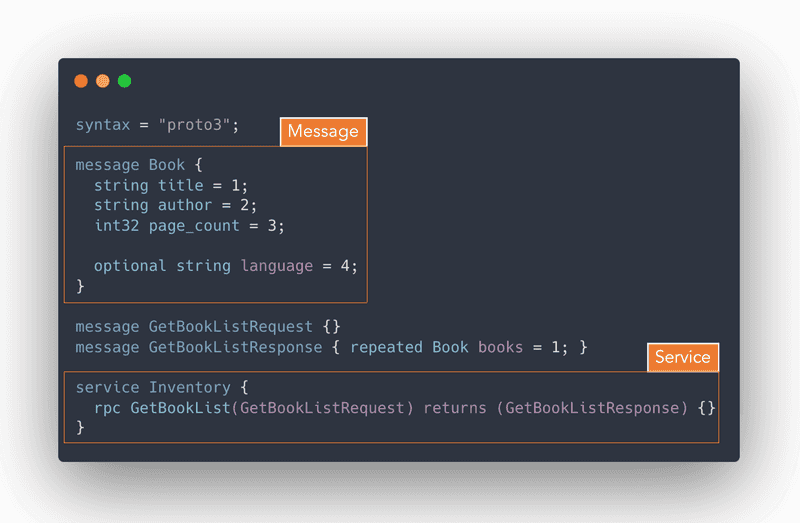 There are many advantages of using Protobufs compared to something like JSON. Once you write the definitions for your service, you can share them with other teams and use them to generate stubs/code that can interact with your service.

Another advantage is that Protobufs are binary encoded. The payload is smaller than JSON, which means it would be efficient to send. This also means that it will use fewer CPU cycles to serialize/deserialize the messages.

Now that we have the Protobuf definitions for our service, we could generate the Server-side and Client-side implementations using the Protoc compiler.

There are 4 modes of gRPC communication styles. Following are their brief introductions. Feel free to go more in-depth by reading through the official docs.

Any technology comes with a set of advantages and disadvantages. Whether you choose to use gRPC might depend on some of these factors.

In this article, we looked at gRPC from a high level. In the next article, we will look at how we can put these into action and generate a gRPC service with Go. Feel free to let me know any feedback or questions. Thanks for reading ✌️